Home News About us Projects in Malawi Donate

Over the past 5 years, we have been approached many times to expand our engagement in Malawi, which began in December 2013. However, we have always been aware that - despite your generous donations and expecting further support from the BMZ - we are far from being able to accomplish this task to the nesessary extent and in a sufficiently short time.

As already reported several times, we therefore contacted PLAN International already more than 3 years ago in order to initiate a cooperation between our organisations in the field of SRH. Within the framework of such a cooperation it would be possible to continue the objectives of our projects on a broader basis and to a greater extent

After following up this idea for a couple of years we have started the planning phase for such a cooperation project with PLAN in July 2018. This project focuses on the goal "Education on sexual and reproductive health for children and adolescents in Mzimba". In the meantime, the goals and individual measures of this project have been defined in detail, the local partner organisations have been selected, the budget is calculated and a project coordinator appointed. Thus, the operational phase could be started at the beginning of December 2018. 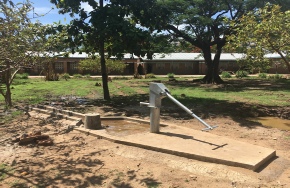 In mid-December we received a letter from Mr. Rodney Chitete, the new Director / Headmaster of St. Mary´s Girls Primary School. He confirms to us that under his leadership the youth centre built in 2017 will be continued for a period of at least 5 years and that the topic Sexual and Reproductive Health (SRH) will be anchored in the curriculum of the school in the long run:

…. I wish to express our sincere thanks to your Foundation and to you personally for your continuous support. My school is committed to continue for a period of five (5) years the project of KYC on Sexual Reproductive Health (SRH) issues, as it was implemented at our school during the project in 2017, funded by Breuckmann Foundation. The project proved to be of great success, as more than 1000 students as well as over 25 teachers was trained. As we receive new students every year, it is of utmost important for us to continue this successful project, in order to increase SRH and Women Human Rights awareness ….

At the same time he asked us for support to improve the currently catastrophic water supply at the school by drilling a water hole and building a well. We have immediately complied with his wish and have provided a sum of 3.000 euros for drilling and well construction.

In the meantime the drilling has been done and the well has been completed. This saves about 120 Euro per month for the drinking water supply, which will be provided by the school for the future work of the youth centre-