As already reported, we started another project in northern Malawi in July this year with the particular aim of ensuring an improved range of Youth Friendly Health Services in the area of Sexual and Reproductive Health and Rights (SRHR) on a long-term and sustainable basis.

Within the framework of the project, funded by the BMZ, a network of youth clubs is being established in which selected youth members of so-called peer groups are intensively trained. With the knowledge thus acquired, they serve as multipliers in their clubs, schools and communities on all SRHR issues. In this way, even young people should be able to make informed decisions in the area of SRHR. Adolescent girls and young women learn about their rights and can thus maintain control over their bodies.

The overall goal of this project is to reduce the number of unwanted pregnancies, especially among teenagers, and thus contribute to a reduction of the still very high population growth in Malawi.

During the first months of the project, theproject  team of our local partner Pamoza has already implemented important project activities:

At the beginning of the project, a meeting with representatives of different groups and organisations took place, in which especially the so-called District Executive Committees (DEC) of the project areas Karonga and Chipita participated. In addition, existing data on SRHR issues in the project area were updated, e.g. on knowledge and use of YFHS as well as on the current situation in different communities and organisations. Both activities serve to ensure acceptance of the project at all levels of society and to enable subsequent monitoring of its success.

Moreover an orientation workshop took place within the framework of a preparation camp, which was attended by young people from different schools and youth clubs, as well as teachers and representatives of health institutions. Once trained, the young people will be youth ambassadors for the project.

In addition, they have started to produce and distribute teaching materials such as posters and brochures. To sensitize not only the primary target group of young people but also a broader audience for the project and its goals one is organizing various information events and taking increased use of radio broadcasts and social media channels.

In my community, there have been a lot of myths and misconceptions about sexual reproductive health, so with knowledge gained through Pamoza Tingakwaniska projects, I have come to know what is true about SRH and this will help me to live a better life and make right choices on sexuality issues. 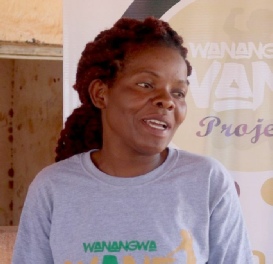