Since November 2021 we are running a new family planning project, which is being carried out in the Karonga district by the Pamoza Tingakwaniska's team, as previously announced. As part of this project, educational events on the different topics of sexual and reproductive health have been held in various communities in the project area over the past months. As far as possible, members of existing local youth clubs were also involved. At these events, which were also attended by local authorities and representatives of youth and health centers, existing myths, prejudices and misconceptions among young people were also discussed and attempts were made to counteract them. For example, the particularly fatal misconception that a woman cannot get pregnant the first time she has sex is unfortunately still widespread. Accordingly, any kind of protection and contraception is dispensed with.

Radio programmes and social media were also used to a greater extent to make the messages of the family planning project accessible to a larger population. This included producing and broadcasting 11 new radio programmes focusing on sexual and reproductive health, the negative consequences of early pregnancies, HIV/AIDS prevention and the impact of uncontrolled population growth.

In addition, a separate flyer on these topics was developed and printed in a print run of 1,350 copies so far, which is distributed to the participants of the project events. 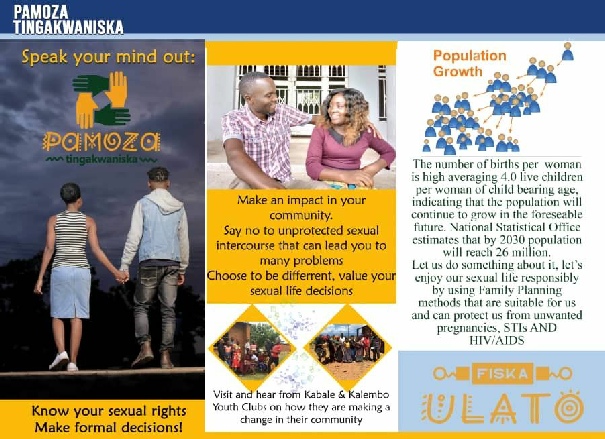