As reported, due to the Corona pandemic and the associated long-term assembly restrictions and school closures, our youth center at St. Mary's Girls Primary School in Karonga could not be continued in the planned way. In the meantime, many members of the peer group who were supposed to pass their knowledge to subsequent grades have unfortunately also left the school, so that a relaunch of activities no longer seems meaningful. At the same time, the Corona pandemic has caused that adolescent girls in particular dropped out of school and education, which has subsequently led to an increase in the number of teenage pregnancies in many areas.  We were therefore increasingly contacted last year about continuing our engagement in the Karonga district, particularly in the area of family planning.

The positive experience we had during the now completed Covid 19 project with the young and engaged team of Pamoza Tingakwaniska, which had realized this project on site in Karonga, encouraged us to follow up on an idea submitted to us by the Pamoza team:

Television and cinema are not yet widespread, especially in the more rural areas of Malawi. For this reason, theater performances, which often take place outdoors, have a particularly broad impact. Therefore, within the framework of pilot project "Theater for Change", we have tested the special opportunities of theater performances in order to specifically approach the local population.

From July to September 2021, the Pamoza-team organised nine events in the two rural project areas of Mwakaboko and Mwirang'ombe, as well as at the CMCK (Cultural & Museum Centre Karonga), where the theatre group ONENESS performed a play that was developed specifically for this project.

The focus of these performances was on:

● Raising awareness among adolescent girls and young women to strengthen their rights and self-determination.

The theatre performances were attended by a large number of spectators and provided a wide platform for dissemination of information. In addition, a dialogue with the audience araised after each performance, during which not only questions about the project issues were asked and addressed, but there was also intensive discussion about current events in the communities.

Moreover, 12 thematic radio programmes were also produced and repeatedly transmitted on Radio Dinosaur and Radio Tuntufy, which broadcast in the local languages of Tumbuka and Ngonde in northern Malawi.

In addition, the Pamoza team worked hand in hand with youth clubs and health centres to reach communities and schools in the most effective way and to advertise for the respective events.

In the course of this pilot project, important experiences were gained for future projects. In particular, the combination of theatre, radio and social media has proved extremely successful, as each medium addresses a different population group.

However, the project has also shown that there is still a high demand among the population in Karonga District for sexual and reproductive health education and services, a demand that cannot be covered with the resources available in the country.

We therefore decided to start a new project on family planning and sexual and reproductive health with the Pamoza-Tingakwaniska team in northern Malawi, which started in November 2021. 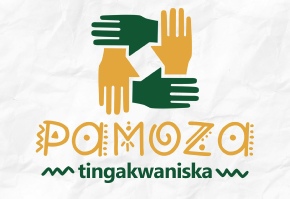 Team and logo of Pamoza Tingakwaniska, which means "together we can succeed" in the local language ChiTumbuka.

Performance of the group oneness art 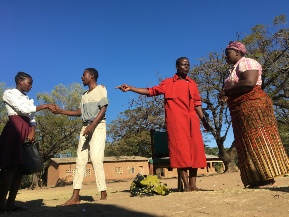 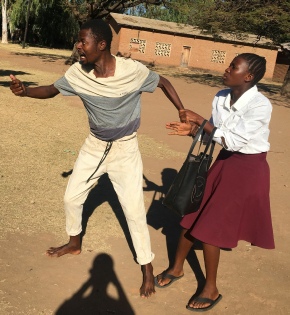